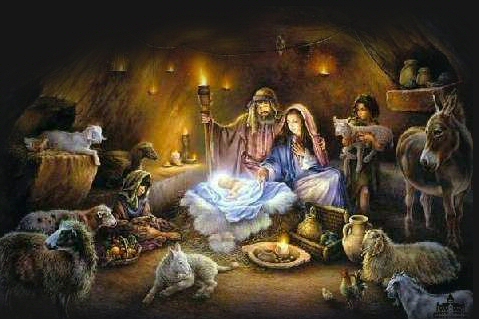 I. A Reality Check

1. Mary and Joseph had to travel as quickly as possible to Bethlehem because Mary could have given birth at any moment.
2. The Bethlehem innkeeper was fully booked, and so Mary had to give birth to Jesus in the barn/stall nearby/behind the inn.
3. Initially, this experience must have been frightening and lonely for Mary and Joseph.
4. “The little Lord Jesus no crying he makes.”
5. The angels who appeared to the shepherds had wings.

How’d you do on the quiz? Check your answers below. (Some of these thoughts are taken from a talk I gave on what really happened that first Christmas.)

Marcus Borg, a member of the liberal Jesus Seminar, claims that the Gospels are in serious conflict: Jesus was born “in a stable” in Luke but in a home in Matthew (Marcus Borg [and N.T. Wright], The Meaning of Jesus: Two Visions [San Francisco: HarperSF, 1999], 180). As it turns out, this isn’t really a conflict at all. Contrary to the traditional Christmas story, Jesus was indeed born in a home! Borg’s claim is based on the notable King James Version’s mistranslation of Luke 2:7: “there was no room for them in the inn.” But the KJV rendering goes against Luke’s in(n)tention.

Over the centuries, the Christmas story has been re-cast and romanticized into a kind of Christian “mythology.” But what do the Scriptures really tell us about Jesus’ birth?

1. There would have been no inns in a backwater town like Bethlehem. They would be found along main roads or in cities.

Mark 14:13-15: “Go into the city, and a man will meet you carrying a pitcher of water; follow him; and wherever he enters, say to the owner of the house, ‘The Teacher says, “Where is My *guest room* [katalyma] in which I may eat the Passover with My disciples?”’ And he himself will show you a large upper room furnished and ready; prepare for us there.”

Also, this word in Lk. 2:7 (“guest room”) is different from Lk. 10:34 (pandocheion = inn), where the beaten man was taken by the compassionate Samaritan. This inn had an innkeeper (pandocheus), and such inns would unquestionably located on a main thoroughfare between Jerusalem and Jericho. One commentary puts it this way, “The traditional picture of a surly innkeeper refusing admission to the needy couple is somewhat dubious.” (I. Howard Marshall, “Luke,” in *The New Bible Commentary: 21st Century Edition*, eds. R.T. France, D.A. Carson, et al. [Downers Grove, IL: InterVarsity Press, 1994], 984).

3. Joseph, no doubt being a considerate husband (cp. Mt. 1:19), would have taken ample time to find Mary a place to give birth, which is what Luke 2:6 indicates: While they were there [in Bethlehem], the days were completed for her to give birth. Mary gave birth after she had “fulfilled her days”—a duration of time. Although people seem to miss this, the passage clearly indicates ample passage of time in Bethlehem before the birth of Jesus.

4. In a culture that so valued hospitality, Joseph would have insulted his relatives by going to an inn. Rather, he would stay with his relations, who would readily have made room for his expectant wife—even if the guest room was crowded and the birth had to take place in the main living area. It would seem ludicrous, given the importance of hospitality in the Middle East, that Joseph would have no place to stay among his relatives—especially if he was “of the house and line of David” and if his wife was expecting. And if Joseph could not find a place for Mary after a few weeks or so, they could have gone back to Mary’s relative Elizabeth, who lived in the same region.

5. In Jesus’ day, animal sheds were typically attached to houses. In Palestine a manger was not normally found in a separate stable; rather, it was “in the main living room of a peasant house, where animals are brought in at night” (R.T. France, *The Evidence for Jesus* [Downers Grove, IL: InterVarsity Press, 1986], 159). New Testament scholar Kenneth Bailey (from whom I borrow heavily in this blog) notes that the manger Christ was laid in was “built into the floor of the raised terrace of the peasant home” (Kenneth Bailey, “The Manger and the Inn: The Cultural Background of Luke 2:7,” *Evangelical Review of Theology* 4 [1980]: 201-17). This stall-next-to-the-house arrangement is what Luke 13:15 presupposes: “. . . does not each of you on the Sabbath untie his ox or his donkey from the stall and lead him away to water him?”

6. When the wise men show up in Bethlehem, they come to a house. Matthew 2:11 states: “After coming into the house they saw the Child with Mary His mother; and they fell to the ground and worshiped Him. Then, opening their treasures, they presented to Him gifts of gold, frankincense, and myrrh.”

These gifts are highlighted as indicating the fulfillment of what the Old Testament scriptures anticipated. A new covenant was in the making—one involving Gentiles (cp. Zech. 14:16: “all those who survive of the nations . . . shall go up year after year to worship the King, the LORD of hosts”). So when the Gentile wise men/magi come from afar to visit the newly born king Jesus, they bring gifts of gold, frankincense, and myrrh. Of course, there were probably other gifts, but these are highlighted because of certain Old Testament references anticipating the coming in of the Gentiles to worship the true God and to honor his Messiah/King. Isaiah 60:6 speaks of the dawning of the restoration (when the “glory of the Lord has risen upon you” [60:1]). It mentions exiled “sons” coming “from afar” (4) and “the wealth of the nations will come to you” (5). Camels from Midian, Ephah, and Sheba (the south) will come: “They will bring gold and frankincense” (6). In the kingship/messianic Psalm 45 (cited in Hebrews 1), the king’s garments are fragrant with “myrrh” (45:8). This psalm speaks of Israel’s king as being over the “princes in all the earth” and “all peoples [Gentiles] will give you thanks forever and ever” (15-16). The magi’s coming signals the coming in of the Gentiles because the day of the Messiah has dawned. The end times have arrived.

The Gospels portray a Jesus who is reaching out to the Gentiles. He is telling the Jewish people to give up their nationalistic and social agenda and follow His agenda (N.T. Wright, The Challenge of Jesus [Downers Grove, IL: InterVarsity Press,1999], 27). Jewish leaders were preoccupied with traditional symbols: land, temple, law (especially Sabbath and food laws), kinship (ethnic heritage) and blessing (material possessions). Jesus criticizes the entire temple system and pronounces judgment on it (symbolized by the temple-cleansing). It was necessarily tied to the old covenant with national Israel; Jesus complained about the failure of the ruling priests in when He cleansed the temple. Instead of being a place of prayer for Gentiles and for regathering Israel’s exiles, it fostered oppression and neglected the needy (Marvin Pate, et al., The Story of Israel: A Biblical Theology [Downers Grove, IL: InterVarsity Press, 2004], 167-8).

II. What of the Angels?

In a verse of the Christmas carol “It Came Upon a Midnight Clear,” we come upon these words about angels:

Still through the cloven skies they come
With peaceful wings unfurled,
And still their heavenly music floats
O’er all the weary world.

In the carol “Angels from the Realms of Glory,” they are called to “Wing your flight o’er all the earth.”
The Bible speaks of angelic beings such as cherubim and seraphim, which have wings (e.g., Isaiah 6). However, what most people don’t know is that the specific usage of the word “angels” in Scripture indicates that they do not have wings. They always appear in the form of men.

III. Docetism in Our Hymnody and Theology

This line from “Away in a Manger” is quite familiar to us: “The little Lord Jesus no crying he makes. . . .” This picture presents a Jesus who apparently never cried as an infant—and perhaps that he never soiled his diapers and never made a mess eating as baby. However, we must be careful about overemphasizing Jesus’ deity and underemphasizing his humanity. This is the heresy of “docetism.” (The word docetism is a derived from the Greek dokeō, meaning “(I) appear, seem.” The Christ seemed human but really wasn’t.

This is a version of Gnosticism, which came to full bloom in the second century AD. It emphasized the following ideas: (a) a secret, saving knowledge (gnōsis) or illumination is available only to a select “enlightened” few; ignorance, not sin, is the ultimate human problem; (b) the body/matter is evil, and the spirit/soul is good—a belief that tended to produce extreme self-denial (asceticism); (c) an eternal dualism exists between a good Being/God and an inferior evil being/god (who created matter); so the creator in Genesis is an inferior intermediary between the ultimate/true God (the Pleroma—“Fullness”) and this world; (d) history is unimportant and insignificant; if Jesus (the Christ) played any part in Gnostic belief systems, he only appeared to be human but was really divine; God couldn’t take on an evil human body or suffer on a cross.

We can commit the same Gnostic error by focusing on Jesus’ divinity and downplaying his humanity. The same applies to Jesus’ temptation. We may say, “Of course Jesus didn’t sin. He was God.” The Scriptures portray Jesus as someone who struggled; it was not a breeze for him to do the will of his Father. He was not play-acting:

IV. Lessons from the Christmas Story

Let me summarize some lessons from this retelling of the Christmas story.