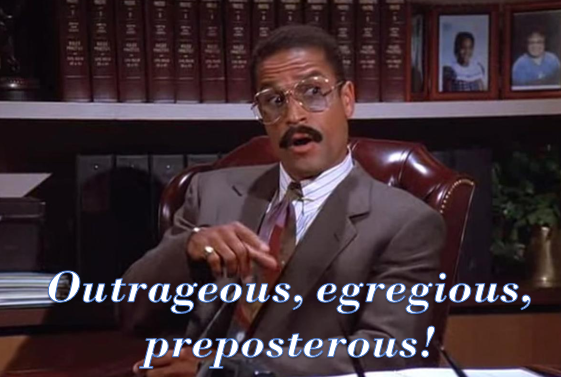 Pardon me for not being “stunned” by the latest political “bombshell.” Or should I say, “for not pretending to be stunned”? To put it another way, pardon me for not exactly buying all of the professed moral outrage I see sweeping the land.

You can ask if this is because I defend degenerate ideas, words and actions by people in public life. My answer is, ‘Of course not. What do you take me for?” You can ask if this is because I am just cynical and apathetic. My answer is, “Yes a little, but I’m trying not to be too much, and I contend that the majority of people, to reiterate, are in fact very apathetic about people’s personal ethics, but like to jump on brief and passing bandwagons of feigned moral outrage when it’s the trendy thing to do.”

Being Outraged is the New American Pastime

Remember Seinfeld’s lawyer Jackie Chiles? He was a kind of parody of famous O.J. lawyer Johnnie Cochran. He used rhymes (like when he told Kramer “Your face is my case.”). He employed strange rhetorical devices and convoluted logic (“Have you ever heard of a ‘guilty bystander’? Innocence is the very nature of bystanding.”). But most comical of all were his fits of pretended outrage: “I am shocked and chagrined! Mortified and stupefied!”

You see where I’m going. Our society has become this kind of parody. Like ‘the wave’ in a football stadium crowd, the ritual of professing your moral outrage becomes like a social chain reaction that rushes with cyber-speed across social media.

But as I said, I’m extremely skeptical about the authenticity of these professions. Surely some people are genuinely offended, but most aren’t – not really. They want people to think that they are, just like they want people to think all sorts of other things about them, which is a large part of the motivating factor behind the specific pics, tweets and posts they present to the world. Our vicarious social media existence has made us a bunch of phonies. But that is another subject.

First, Why are you Shocked?

Candidate Trump had some frat-boy talk about the ladies some years ago. Guess how surprised I was to hear it? If you said, “Not at all,” you win. I can’t pretend to be surprised, both because of who said it and because of the cultural context in which we now find ourselves.

Consider the source. More than most people who run for president, Trump is a widely known personality. The average person doesn’t follow politics most of the time and doesn’t know the past political careers of people who end up being presidential nominees, but everyone participates in pop culture and watches TV shows like “The Apprentice.” In other words, you know this guy. He’s been in the public eye for decades, and he’s been the same guy for all that time. He’s a rich guy, a fat cat, a big shot, an alpha male egotist accustomed to saying and doing as he pleases. He’s never concerned himself with the opinion of other people. He’s never figured that he needs anyone’s approval since he can “buy and sell” most of those who would criticize him. Being born into privilege and surrounded by wealth doesn’t necessitate all of those negative traits we might associate with it, but the temptation is very strong for people reared in that environment to become ‘that’ kind of person. And anybody paying attention has seen long ago that Trump is every bit the stereotypical public persona he has presented to the world for all of these years.

And beyond his specific context of NYC real estate, casinos, beauty pageants and television shows, there is the larger arena of American culture that, in many ways, Trump’s personal ethics reflect quite accurately. So not only should you not be surprised at his words and actions on account of the person he has long ago demonstrated himself (proudly) to be, you should not be surprised at them given the sordid environment in which all of this takes place. Our culture is all about most of the things that are consistent with the Trump brand. We love ourselves some reality TV, we love casinos, we love pageants of all kinds, we love objectifying women, we love raunchy sex comedy, and we love the idea of millions of dollars.

As far as I can tell, a lot of those riding the wave of offendedness don’t have a moral problem with Trump’s way of thinking or living so much as they envy it. They want to BE him. Isn’t financial gain and sexual freedom what so many people pursue today? Why not call that truly progressive or morally evolved? When Trump throws off traditional ideas associated with personal morality, he looks to me like a consistent reflection of our present culture, which has been coarsened and pornified to the point that, once again, I am skeptical about the professed shock and outrage I see across social media.

Second, Why are You Morally Outraged?

Outrage itself is an emotion and not an argument, but it implies that the outraged person has vehement moral disagreement with someone’s views or actions. It is the outworking of a moral judgment of something you deem to be wrong to such a degree that it provokes the emotional response.

In keeping with and in light of my dim moral assessment of our present culture, I would challenge each person jumping on the bandwagon of moral outrage to provide a clear and coherent basis for his or her moral judgement on the issue. I am doubtful that most people could comply with that request. Their main reason for deeming something morally wrong is that at the moment everyone else is doing it and it is just the thing to do.

Am I doubting the wrongfulness of Trump’s (or anyone else’s) immoral words or actions? Not at all. Am I questioning the innate and God-given basic moral sense of people? Not entirely. What I am questioning is their clarity of thought, their consistency and, to some degree, their integrity as moral judges.

Here’s what I mean. People are moral creatures by nature. We are moral agents and moral reasoners. We judge things on moral grounds constantly. It is natural and normal, stemming from who and what we are. It is a reflection of the image of God. But it is subject to a lot of confusion, some of our own making. The conscience is an imprecise internal instrument due to a thousand influences upon it that can weaken its effectiveness.

I have paid particular attention to this over the last couple of decades. I notice it in the culture at large and in the thinking of those we have raised in this culture. The classes I’ve taught for well over a decade now (including Ethics itself) reveal pretty clearly the trajectory of the moral reasoning we are instilling in the emerging generation. They reason with their feelings and maintain a constant awareness of the cultural ‘temperature’ of public opinion as provided moment by moment across social media. They are knee-jerk relativists, assuming without much critical thought that moral points of view are matters of personal opinion, each equally valid and none having special privilege.

For many today, there are only a few things that are objectively wrong: racism, intolerance, oppression, and for some maybe a few others like income inequality or mistreatment of the environment. For most everything else they punt to unthinking relativism. Grant that this moral philosophy is utterly indefensible. But, as some of them might say to that, “whatever.”

The more intellectually inclined “progressive” thinkers fare no better on this count. They are likely to jeer at squeaky clean politicians (like Romney and others). That’s so old fashioned and out of date, after all. We’re beyond that now. We’ve evolved. But meanwhile such hipster intellectuals end up grounding their ethics in what amounts to just a more sophisticated version of subjectivism or cultural relativism. They may reduce all moral inclinations to biology, for example, saying that evolutionary advantage accounts for the very capacity of moral feeling in homo sapiens. I have not the time here to demonstrate the bankruptcy of such speculation as a moral theory. If you want to know more I will be happy to elaborate in the comments area.

In summary, I have posed a Socratic question that challenges the currently prevailing moral outrage in a two-fold way. I have asked what about recent events truly surprises us, while suspecting (if not alleging) that a lot of the claims of shock are not honest or genuine. And furthermore I have asked on what basis people are morally outraged (again, to the degree that they truly are). My suspicion here is that a large number of people are merely pretending to be morally outraged and would prove incapable of articulating a coherent basis for their moral judgment behind their professed outrage.

Clint Roberts has taught Philosophy, Religion, Ethics, Critical Thinking, Apologetics, and a few less interesting subjects over the last decade plus. He long ago attended a fine theological institution. Later his doctorate focused on famous arguments by Clive Staples Lewis. He and Wanda lived in Texas, Idaho, & Utah before coming to Oklahoma. They have six kids & several species of animal.  He teach, he preach, he roast the coffee, he grow the hot chili pepper, he milk the goat. And he ascendeth weekly unto the Free Methodist pulpit while continuing to teach at local universities.

4 replies to "Shocked and Appalled? Why?"