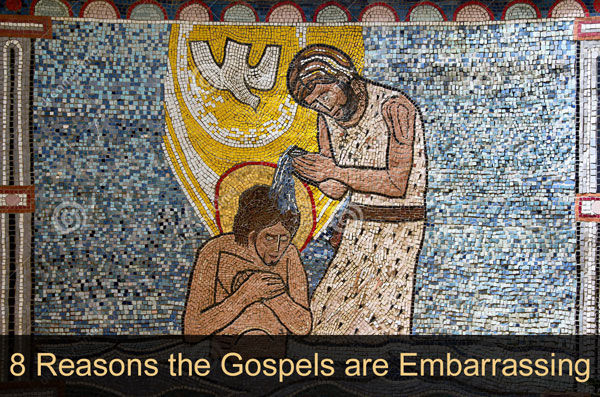 I don’t know if you have ever realized this, but the Gospels are quite embarrassing. No, I don’t mean that the Gospel itself is embarrassing, but that the four Gospels, Matthew, Mark, Luke, and John, are embarrassing. Well, let me be a bit less provocative and a little more precise: the Gospels contain many accounts of the Christ story that, if true, would cause early Christians to blush.

I want to briefly talk about the “criterion of embarrassment.” This is a criteria that helps historians determine the truthfulness of historic accounts. The basic idea is this: when people lie, embellish, or make stories up, they normally do not include material that causes them to lose credibility. Paul Eddy and Gregory Boyd call this “self-damaging” material (The Jesus Legend, 408).  E. P. Sanders calls it “against the grain” (although that it a bit too close to the “criterion of dissimilarity”).  Most people don’t make stories up about losing a fight or being the bank employee who failed to lock the safe the night before. We normally cover up our mistakes or embarrassments in order to look more polished. When someone gets pulled over by the police late at night and the officer asks if they have been drinking, they would not say they had been drinking if they really had not. People don’t lie on resumes and say they did not graduate high school when, in fact, they have a masters degree.

[Tweet “I don’t know if you have ever realized this, but the Gospels are quite embarrassing.”]

In the ancient world, this was no different. It was the tendency to omit, change, or lie about things that would bring shame upon the writer or his community. When histories are written by a nation, those in power want their nation to look as good as possible; therefore, they only include accounts that put them in the best possible light. For example, the Assyrian Lachish Relief is the story, carved in stone, of Sennacherib’s conquest and defeat of Judea in the 8th-Century BCE. This story was proudly displayed by the Assyrians in order to show their power and intimidate outsiders. This was a common practice. Rarely, if ever, do we discover similar instances where nations make prominent displays of their failures.

The basic idea is this: people always want to put their best foot forward when introducing themselves. How much more would we expect this to be the case in the Bible when the first Christians are attempting to convert others to Christianity? But, as we will see, there are many stories in the Gospels, having to do with the historic Jesus that are quit embarrassing and hard to explain if the story was made up.

Here are 8 of the most embarrassing moments in the Gospels:

John the Baptist was called the “baptist” not because he belonged to a particular denomination, but because he nuanced an initiation rite of baptism adopted by the Christian community. John’s baptism is explicitly said to be a baptism of repentance for sins (Mark 1:4, Matt. 3:1-2, 6). Yet we have Jesus, who did not need to repent because he never sinned, being baptized by him. Why? John Meier puts it this way: “Mysterious, laconic, stark Mark recounts the event with no theological explanation as to why the superior sinless one submits to a baptism meant for sinners” (A Marginal Jew, 168). Matthew, writing later, seems to recognize the difficulty and adds the discourse between John and Jesus before the baptism where John attempts to prevent Christ from being baptized, expressing his unworthiness in comparison to Christ (Matt. 3:14-15). While this takes away a bit of the sting, it still provides no precise theological explanation as to why Jesus was baptized. John, when he writes, leaves the baptism out all-together.

Jesus’ Family Did Not Believe

John 7:5 tells us that even Jesus’ brothers did not believe in him. This is a difficult saying since one would presume that they would have better knowledge of who Christ was than anyone else. Yet on more than one occasion, we are told of their disassociation with him, even to the point that they thought he “lost his mind” and needed to be restrained (Mark 3:21).

This is perhaps one of the least expected turns that Matthew takes in his Gospel account. John the Baptist was the first to recognize that Jesus was the Christ. Luke even has him leaping in his mother’s womb at the presence of Mary who was just pregnant with Jesus (Luke 1:41). When John baptized Jesus, he witnessed as the Father spoke from heaven and identified Jesus as his son (Matt. 3:17). Jesus himself said that there was no greater man, born of woman, than John the Baptist (Matt. 11:11). Yet John is seen at the end of his life sending his disciples to Christ to inquire whether or not Jesus was really the Messiah (Matt. 11:2-3). This is probably the reason why the rest of the Gospel writers left this out of their story.

The Disciples Doubted After the Resurrection (Matt. 28:17)

Related closely to John’s doubt is something else we don’t expect. After Christ’s resurrection he told the women whom he saw to gather the disciples and have them meet him in Galilee. Once there, Matthew 28:17 records this: “And when they saw him they worshiped him, but some doubted” (Mat 28:17 ESV). This would not be too surprising if only one of the disciples doubted since we know that John records Thomas doubting. But this is some of the disciples (or, possibly, all of them according to D. A. Hagner, Matthew [WBC], 2:884). And unlike John who shows how Thomas’ doubt is resolved, Matthew leaves it open. Since this is so damaging (from a certain perspective), it is hard to know why Matthew would include this if it were not historical.

In Mark 13:32 Christ expresses his ignorance about the timing of his coming: “But concerning that day or that hour, no one knows, not even the angels in heaven, nor the Son, but only the Father (ESV). Luke does not include these words at all and in the parallel in Matt. 24:36 the manuscripts do not agree. Some include  “nor the son” and some omit it.  It is quite possible that an early scribe left these words out so that Christ might save face. The early church had the tendency to magnify the divine attributes of Jesus, so it is difficult to make the case that this is not historical.

Women are the First to Witness the Resurrection

This is one that is often brought up. Craig Keener puts it well enough: “The witness of women at the tomb is very likely historical, precisely because it was so offensive to the larger culture — not the sort of testimony one would invent. Not all testimony was regarded as being of equal merit; the trustworthiness of witnesses was considered essential. Yet most of Jesus’ Jewish contemporaries held much less esteem for the testimony of women than for that of men; this suspicion reflects a broader Mediterranean limited trust of women’s speech and testimony also enshrined in Roman law.” (Keener, The Historical Jesus, 331)

In Mark 11:13-14 Jesus curses a fig tree for not having any fruit due to his hunger. While their may be true prophetic significance to cursing the fig tree (played out immediately after as Christ cleanses the temple), from the standpoint of the narrative, it carries some embarrassment as it depicts Christ becoming angry at a tree for not producing figs, even though it was not the season for figs (Mark 11:13). Another embarrassment implied in this is that Jesus did not know the tree had no figs on it. It seems unlikely that the early church would, again, share a story that illustrates Christ’s ignorance of something.

Death and Resurrection of Christ

This easily escapes our notice since the basic story of Christ is so well known. However, both the death and resurrection of Christ are, from the standpoint of the culture of the day, embarrassing and damaging. Concerning the death of Christ on a cross, Paul sees this problem: “But we preach Christ crucified: a stumbling block to Jews and foolishness to Gentiles” (1 Cor. 1:23). The word used for “stumbling block” is skandalon. Louw-Nida defines this as “that which causes offense and thus arouses opposition.” Why? Because the Jews would never have thought their Messiah would have been hung on a tree. “Cursed is one who hangs on a tree” (Gal. 3:13; Deut 21:23). The Greeks thought of the resurrection as foolishness as they were dualist, essentially believing that the material world was evil and the spiritual world good. They would have scoffed at the idea that Christ returned to physical form. This is why later Greeks attempted to adapt the Christ story, doing away with the physical resurrection. Marcion is the most famous promoter of this view (see Docitism).

[Tweet “The Greeks would have scoffed at the idea that Christ returned to physical form.”]

In other words, in the culture of the Apostles, the death and resurrection of Christ would be a very unlikely story to make up and expect people to devote their lives. But somehow this story took the world by storm in the first centuries of the church. This only makes sense if it were true.

Betrayal of Christ by one in his inner circle (Judas).

Christ Could not Heal People in His Hometown (Mark 6:1-6)

The women mistook the resurrected Jesus for a gardener (John 20:15)

The criterion of embarrassment does not provide absolute assurance in any case. There is always the possibility that what we believe to be embarrassing today, might not have been so to the people of the day. But from what we know, the list provided here is substantial. It is hard to believe that anyone would make up events such as these. In the context of the day, if the Gospels were fabricated stories, these examples could do nothing but damage the credibility of their story. But if the Gospels were true, this is exactly what we might expect and hope to find.

C. Michael Patton is the primary contributor to the Parchment and Pen/Credo House Blog. He has been in ministry for nearly twenty years as a pastor, author, speaker, and blogger.

Th.M. Dallas Theological Seminary (2001), president of Credo House Ministries and Credo Courses, author of Now that I’m a Christian (Crossway, 2014) Increase My Faith (Credo House, 2011), and The Theology Program (Reclaiming the Mind Ministries, 2001-2006), host of Theology Unplugged, and primary blogger here at Parchment and Pen. But, most importantly, husband to a beautiful wife and father to four awesome children. Michael is available for speaking engagements. He can be contacted at [email protected]

The Problem of the Nameless Gospels

7 replies to "Eight Reasons Why the Gospels are Embarrassing"