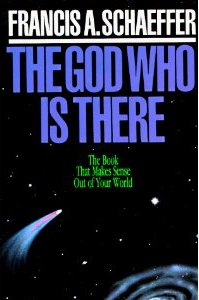 It is fairly common knowledge to anyone who knows me that along with CS Lewis, Francis Schaeffer had a huge impact on my thinking in my early twenties. When asked why I work in *this* type of ministry my answer always starts with “well when I was 21 i was introduced to Lewis and Schaeffer within a week of each other. From there I pursued Apologetics and subsequently (15 years later that is) arrived at systematic theology.”

Earlier this week someone was telling me they have been  re-reading Francis Schaeffer’s “The God Who is There.” I thought you know, I have that book on my shelf and haven’t even thought about it for years.

So many things are leaping out at me. I’m like wow, this really did impact how I see the world. There are things in it that I find myself having said and saying verbatim ALL the time without even realizing it. Say what you will about Schaeffer’s scholarship (yes people question it) the man had some serious knowledge about some very profund and difficult subjects.

But in revisiting “The God Who is There” what stands out most this time around is Schaeffer’s heart for the lost. While he was highly and even harshly critical (and rightly so) of certain philosophers and artists and theologians of  “the Academy”,  he was more concerned than critical for those who were embracing the aberrant systems it had been peddling. He was worried about these people who had fallen prey to the deception. He was worried about the state of the souls that produce  such error and moreover the state of the souls consuming it.

That has been hugely convicting for me. It’s caused me to reflect on the fact that my initial reaction to the chaos in our culture has typically been that of harsh criticism (which again such a thing it is certainly warranted.) But it has reminded me it must be tempered with compassion. In fact it’s made me realize compassion has to be front and center.

It is maddening that naturalism and existentialism and statism and all manner of aberrant views are so pervasive in our culture (even more so than when Schaeffer initially wrote what he did.) But what I’ve forgotten is how saddening it is.

Out of that sadness should flow empathy and compassion and a fervor to act on both.

So nearly 25 years after first reading it, I am reminded that The God who is there, still is. He is not silent. He is using His people to express His own heart to a lost world and the chaotic culture it produces. He is using us to show compassion and kindness and empathy through bearing the news of Hope in Christ. After interacting with Schaeffer again, a man that did that so well, I’m resolved to do a better job of it myself.

Apologetics Unplugged: One off episode – The Final Republican Debate of 2016

Are We Just Too Shallow to Solve our Problems?

15 Things that Should Not Influence your Vote

Honestly, Do Any Lives Matter?